Reading Dental Radiographs for Tooth Resorption in Dogs is a very common question veterinarians ask at courses. This has been shown to be very common so recognizing tooth resorption and determining the appropriate action in dogs is very important.

As I’ve mentioned before, one of the common changes we see in our patients that is a real common question I get online and in our live seminars is “what about tooth resorption in dogs? How do we approach that?” I’ve got a couple examples for you.

Take a look at this area, this is the left maxilla in a dog and from a gross standpoint, there are some changes there. There’s some swelling, there’s a little bit of recession in the furcation possibly on that mesial aspect of that first molar. Maybe a little of recession but, overall not too bad. Looks like that fourth premolar is probably fractured a little bit or worn. The third premolar has got some inflammation and swelling there as well. 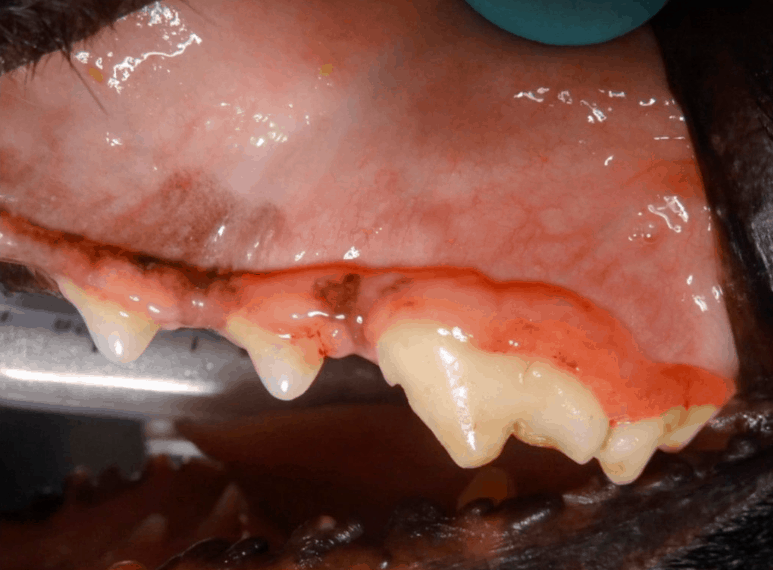 Looking at that from a radiographic standpoint, look at those roots. They’re pretty much non-existent on that third premolar. They’re significantly shorter or attenuated on the fourth premolar and where those blue arrows are, take a note of that because I’m going to show you a gross picture of what that looks like. That’s tooth resorption on both of those teeth where the roots has been severely compromised and we’re going to show you how to treat that here very shortly. Again, that didn’t look too bad grossly but, if you look at it radiographically, it’s significant and you look at the crown there kind of to the left of that right arrow and underneath the top arrow. We’re starting to get what may be some involvement with the crown. Eventually that Crown will get involved like it is on that third premolar and that is when it becomes uncomfortable and or painful.

You can’t really see that crown disruption there on that image but, you can definitely see it there. 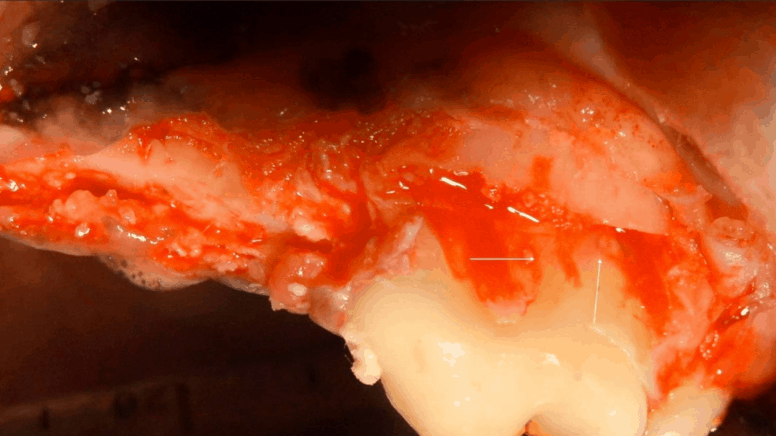 The gum would have been growing into that crown there on the left and would be painful for the patient or very uncomfortable.

Looking at grossly, those little arrows outline the interface between the tooth and the bone that you see radiographically. At the point of the arrow, that’s where the tooth stops and the bone begins. 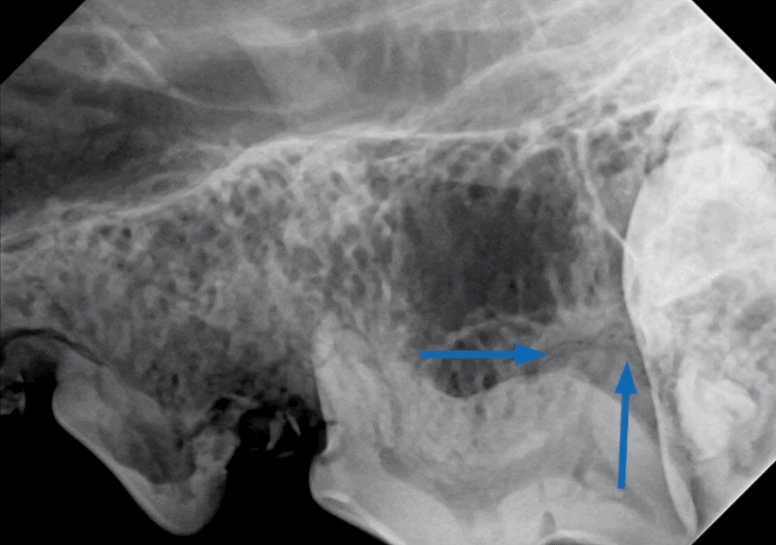 So here again what that looks like radiographically. I’ve got a better example to show you a little bit better without all the blood. What we would do, would be to go in there and remove that tooth as it exists to the bone level, smooth all that bone down, and then close that. 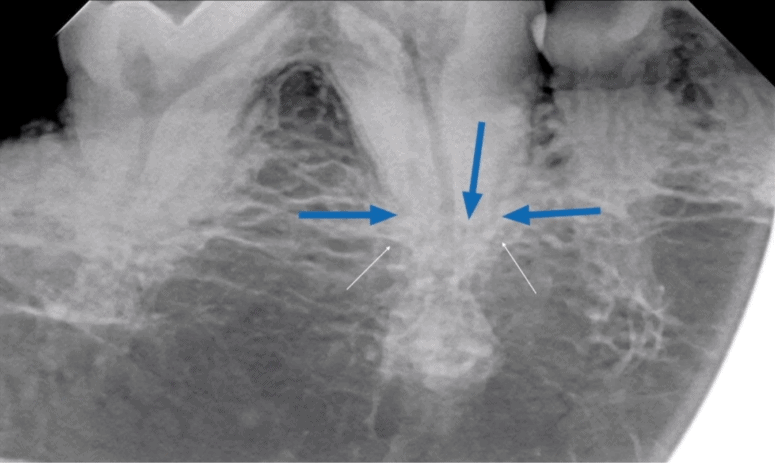 Here’s another example, that little thing in the center of the picture that’s on the unattached gingiva, that’s not a lesion. That’s just tissue debris from where we did the partial extraction of the tooth above that one. You can see up above, that same stuff if you look in the shadow at the top, that’s nothing.

The tooth looks pretty normal, from a radiographic standpoint looking at it grossly, here we can see where those blue arrows are, that’s tooth. Then where the little white arrows are, that’s where the bone is replacing the tooth or has replaced the tooth. That is what we’re about to look at and this is a really good image. This is looking at it from a surgical standpoint with the patient turned like we would have it positioned with the crowns facing us if we were going to do the procedure which would involve removing the tooth structure and leaving the area from those white arrows apically, which is all bone. 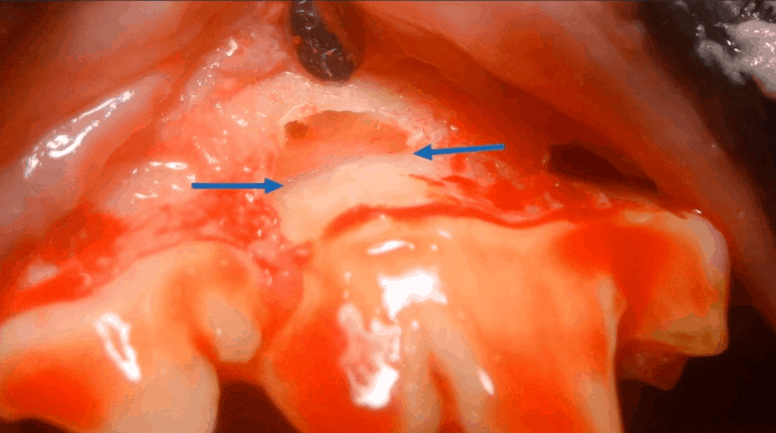 Looking at that from this standpoint, there is that line of demarcation in that same tooth. We’ve got that exposed, there’s the arrows where you’ve got the bone on one side and the tooth root on the other. That’s how far we would go down to remove that tooth and we call that partial extraction. We’re extracting the part of the tooth that is still tooth and we’re leaving the bone that is replacing the tooth root.

One thing i want to point out, look back on this radiograph. This shows you where the crown is starting to be destroyed on that first molar on that furcation and then even on up to the distal and mesial root to a lesser extent. Again, look to the right on that fourth premolar and you’ll see where the crown is involved. When you’re making decisions on these, if a crown is involved, you’ll want to do your partial extraction. If the crown is not involved but, it is really close to involving the crown, in other words those changes are close to the marginal bone level and close to the crown then you’ll want to go ahead, unless the patient is ancient, go ahead and do partial extraction. Then, smooth the bone and close. Those are some guidelines when we’re dealing with those cases. 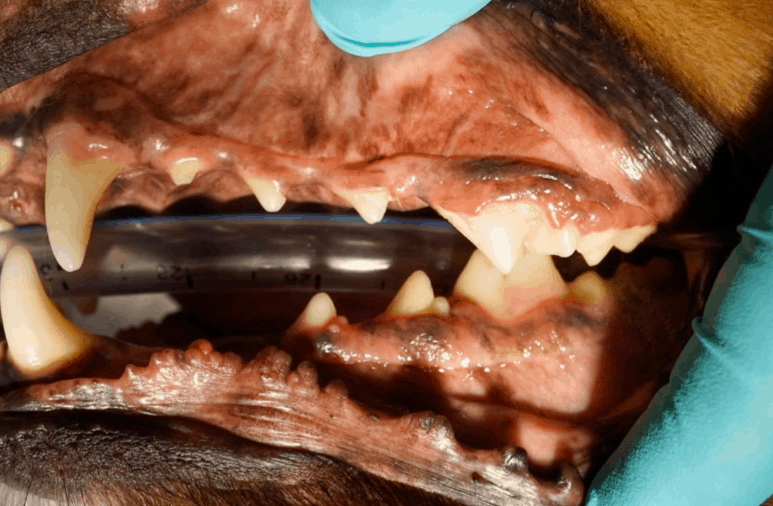 Going on to another case, this is just another example where it doesn’t look horrendous grossly and we’re actually looking at the two or three premolars behind the canine tooth here.

Here’s the radiograph, we’ve got almost near total disruption of those roots. We can go in there and literally just remove what is being replaced by bone grossly and radiographically and then we’re ready to close that. 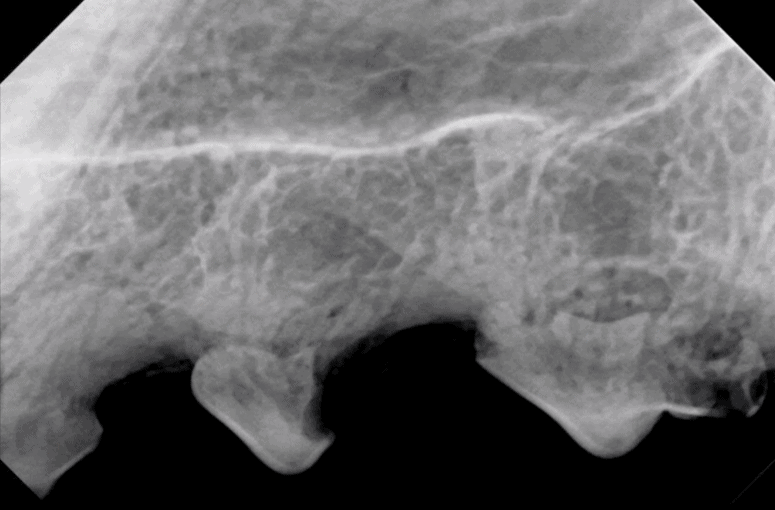 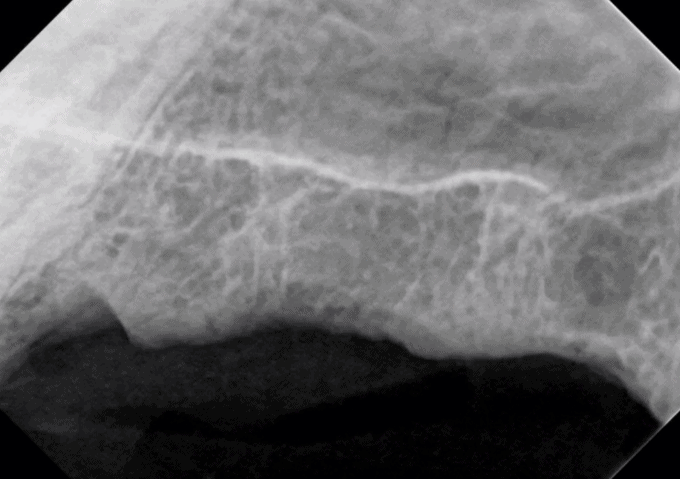 Here’s the after closure and that’s another example of tooth resorption. 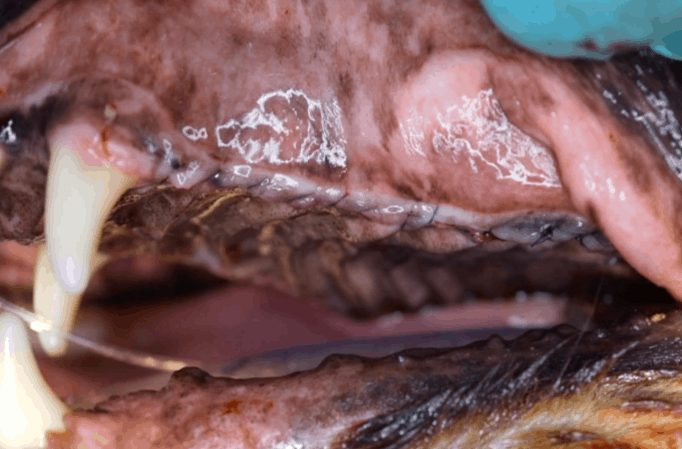 Here’s another pretty dramatic example of pretty much normal-looking incisors and then, look at that.

We’ve got total replacement. There’s no periodontal ligament space there or almost near total replacement of the root structure there then, we’ve got some significant crown involvement starting that we can’t even see yet grossly. We would go in there on those and take those back to the bone and make sure that we’re looking at bone or bone replacing tooth. If that is confirmed grossly and it looks like it does radiographically where those are resorbing or almost near total resorption and replacement with bone then, we would proceed to close that. I hope you guys got a good understanding of tooth resorption and how to approach that. Very important, very common. We see that really, really commonly in dogs are are older and it happens quite frequently. Be aware and look for those. Now you kind of know how to approach those. You dont know every instance which, is impossible to go over obviously but, you’ve got the general guidelines that you can use for that. 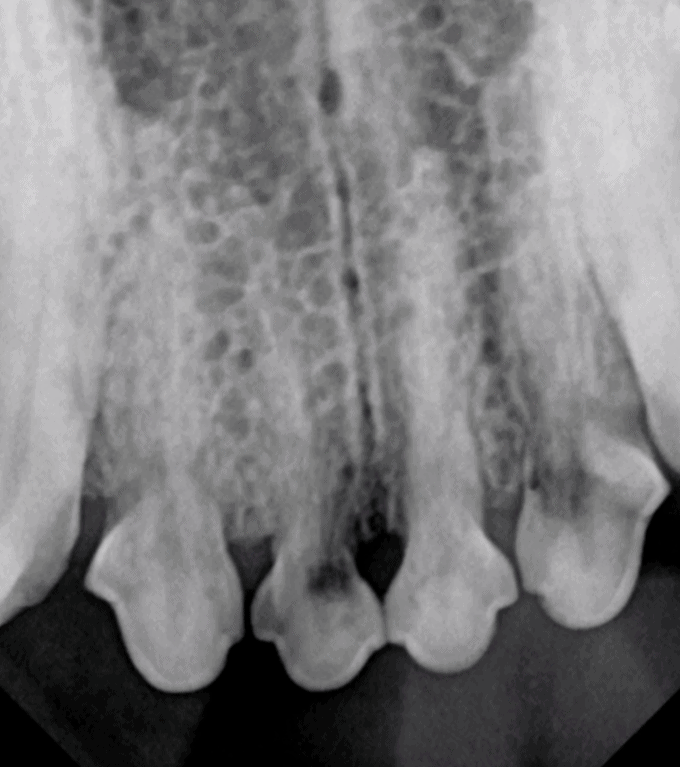